I’m standing in The Great Hall at Edinburgh Castle, surrounded by historic weapons of war. They’re arranged artfully, often highlighted by spotlights. I’m torn between admiring the beauty of each arrangement, and imagining what it was like to be on the receiving or giving end of these weapons. This isn’t a new feeling for me; just a new setting.

Here are several other examples from The Great Hall. Each display was created from medieval weapons of warfare. Each projects its own strange beauty. No blood and gore. Just the shining gleam of silver and gold, set against beautifully carved wood such as that found in cathedrals and churches. 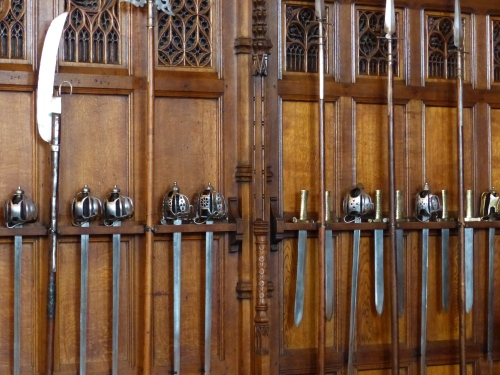 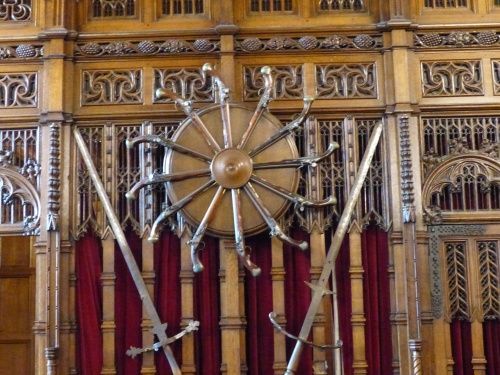 I’m not a pacifist, and freely acknowledge my country has its own way of glorifying weapons of war. What I can’t escape is that displays like this don’t generally highlight body counts of men, women, children and animals.

Why do we celebrate these remnants of historic battles? The battles themselves were great in cost, though not always great in honor. Except for those who fought valiantly and died, physically and/or in their souls. Some believed they were doing the right or even righteous thing. Others did what they had to do.

Perhaps displays like these aren’t about the glory of past wars. Perhaps they’re an invitation to remember the high cost of war, including the lives of everyday people still touched by generations of wounds.

8 Comments to “weapons of war”