Time for Big Brother to meet Baby Sister! He’s captivated by her every move and feature. He also notices the earth shifting beneath his feet. He knows he’s getting a little sister; he doesn’t, however, have a clue what that will mean. Nonetheless, he throws himself into his new role with exuberance.

We now have, though we don’t realize it yet, an extroverted Son and an introverted Daughter. Maybe you can see a bit of it in the photos? I wish I had tapes of the nonstop chatter and questions. On second thought….

Here are a few photos taken soon after we brought our Daughter home from the hospital. In fact, the first photo is the day we brought her home. You can see the hospital bands on my wrist. I think D is giving Son the talk about how to touch the top of his sister’s head.

In the photo below, I can’t help noticing the Andrew Wyeth print above the couch. Calming and peaceful. The exact opposite of what happens when Son gets on his stick-horse and gallops around the house. 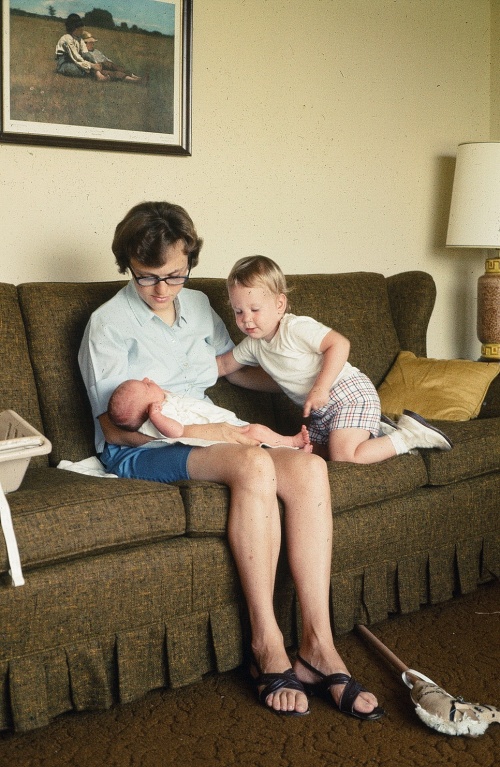 Shortly after we got home from the hospital, my mother and father came to see their new granddaughter and to help with whatever needed to be done–laundry, cooking, cleaning, gardening, and admiring their first granddaughter! I think the photo below was taken on a Sunday morning. Those look like Sunday shoes and socks on Daughter.

The Currier and Ives print swivel rocker was my favorite chair ever. It lasted for decades before having to be retired. Comfy, comforting and always peaceful, especially with good music in the background, as seen here.

We don’t have a TV yet. Just the sound equipment we brought from Cambridge, and a growing collection of records that now includes children’s songs and stories. No piano in the house, but lots of music for relaxing, marching, crying or singing.

Definitely another Sunday photo. Son is wearing his new ‘suit,’ made by my mother or by me. Can’t remember. Daughter has her now-familiar taking-it-all-in look. She was a quiet, present, calm, and patient second-born. She had no trouble, however, signaling when enough was enough. To say she had a ‘voice’ on her would be an understatement.

The week we arrived home, a big package came for Son. It was from D’s mother. A gift to celebrate the arrival of his sister. Here he is pulling it out of the box. Meet Big Bear, one of many stuffed animals who featured in multiple make-believe stories and activities.

Just looking at these pictures makes me a bit nostalgic. But not too much. The journey from there to here has been as human as any family’s journey. Which is why I want to keep writing about myself.

The far side of this journey feels better than the process of getting here. Yet I look back now and see connections I never saw back then. Being able to do this simply increases my gratitude for what I have now, and for family members who made this journey with me.