Breakfast with the Birds

Most days I’m mesmerized by the way birds cooperate in order to get a bite to eat. Actually, I’m not sure they’re cooperating. They seem to love or at least tolerate their unspoken pecking order, which lies at the bottom of most of their unruly behavior.

Almost every day I wonder what it would take to live in a different human pecking order. One based on need and the desire to survive together. Not on our current order driven by size, brilliant feathers, or loud, rude voices.

Last night I was feeling down. Having my computer keyboard die on me yesterday was more than I’d planned on. Most evenings, I write in my journal. Last night I decided to read from Without a Flight Plan. It was just what the doctor ordered. A bit of birdseed to get me through the night.

This post was created with thanks to D for loaning me his ThinkPad.
Thanks to you for stopping by!
Elouise♥

I woke up this morning feeling down, weary and discouraged. ‘Dis-couraged.’ An interesting word. It means I had courage ‘back there,’ and now I perceive a deficit. How can this be?

If I go back to my childhood and teenage years, I know when dis-couragement happened and why I need to attend to it, lest I lose my voice or become an enabler.

As a young girl I knew when the flames started licking around my legs, weakening my focus and my courage. Back then I persistently carried focus and courage into every punishing situation inflicted upon me. First by my father, and later by men with power to inflict punishment on me as a professional. It’s called bully behavior.

One gift of being a childhood survivor with PTSD is the ability to feel when certain dynamics are in the air. Dynamics neither we nor the person in control are necessarily able to change.

The behavior we’ve seen thus far from our new president is the behavior we’ll most likely see for the next years of his tenure. We already saw it in the presidential election cycle. Nothing has changed except this: the power of the office of President of the United States of America now protects him.

So here I am today, feeling dis-couraged by the events of this past week.

Back to my father. As a child I was powerless. There was no way I could replace him with a different father. Nor could I interrupt his agenda for me. Especially when he determined I needed to be punished.

I’m an adult now. I’ve done my homework. I’ve learned not just to interrupt and replace the internal voices that mess with me, but the voice of my father talking about himself. He died in 2010.

Now there’s Mr. Trump. I want to interrupt him. The presidency isn’t all about him. Nor is it a platform for bully-talk toward and about others. One painful example will do: his language and behavior toward women who are, apparently, there to serve the desires of his heart.

I want to be part of a movement to interrupt political bully talk and replace it with dialogues that make a difference. I’d love to hear what you’re thinking about. Or how your courage is holding up.

We grow accustomed to the Dark —

For several weeks I’ve been drawn to Emily Dickinson’s poem below. I wonder where it might find you today. My comments and personal reflection follow the poem. END_OF_DOCUMENT_TOKEN_TO_BE_REPLACED 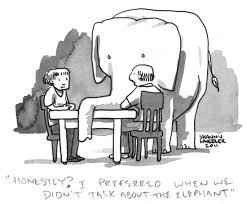 The elephant in the room.
What I don’t want to talk about.
Especially with people I love.

Mortality sounds better.
Not so stark and final.
Wiggle room between now and then. END_OF_DOCUMENT_TOKEN_TO_BE_REPLACED