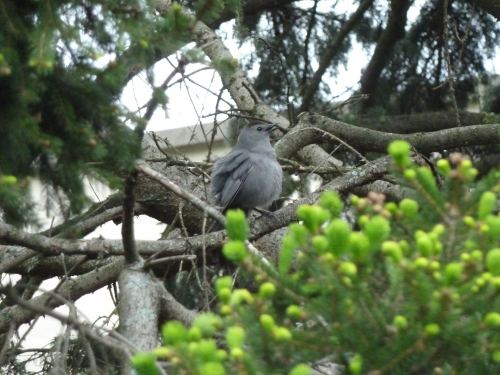 I spotted him just as we were finishing a quiet walk through the cottage garden display at Longwood Gardens. The young gray catbird was making an enormous amount of noise. Some on key, some petering out and falling to the ground.

From my perspective, he was practicing to become a concert catbird, struggling with new melodies and his still brand new voice.

I have a weakness for catbirds. They don’t have flashy feathers; instead, they have some of the most beautiful songs I’ve ever heard. Happily, they like our yard. Sometimes we get an extra treat: they seem to be competing with each other for the best voice of the day!

Shifting gears, here we are on the ground with a new Presidential situation. We face monumental problems for which we need monumental solutions. As a writer, I want to find a different, somewhat new voice. Not to parrot what I hear from the White House or from disgruntled or elated citizens, but to keep naming truth about myself and our situation, as I see it.

When I first started blogging, I wasn’t prepared for this kind of writing. The kind where I get to put the words out there, but have only small clues about how my audience is responding—or not. So I’m going to stay with what works for me—focusing on myself, and making connections with what’s happening in my back yard—literally and figuratively.

I don’t have what that young catbird has. I do, however, have a voice that needs exercising. I look forward to the coming months, though with trepidation.

Yesterday was communion Sunday–via virtual church on YouTube. “This is my body broken for you.”

We can’t turn the deaths of broken Covid-19 bodies into beautiful ceremonies. Still, there’s something to be said for the way this earth welcomes our broken bodies without judgment. Death can’t be glorified. It can, however, be seen as the beginning of something else. Often as release from what has become unbearable.

I hope a catbird sings soft songs for me when my time comes. I also pray this Monday finds you grateful to be alive, and ready for whatever comes next.

from a nearby tree

Have you ever heard a catbird? If so, you already know their song is unmistakable. Loud, almost hyper mimics, they punctuate their unending songs with sharp ‘catcalls.’ Sort of like the sharp ‘meow’ of a cat. Unlike other mimics (thrushes or mockingbirds), they don’t usually repeat their songs.

We hear them every day. Especially now, when birds are nesting and nests need defending. They crank up their musical contributions before sunrise, and continue past sunset. We heard one yesterday evening when we went out walking. It was perched in a tree just above our heads, well past sunset.

Catbirds don’t seem worried about running out of songs. Instead, they’re worried if you come too close to a nearby nest. When that happens, they aren’t shy about dive-bombing around your head, descending from a nearby thicket to cajole you into leaving the area. They don’t give up, and they aren’t bashful.

God doesn’t swoop down from heaven to defend us or to scare intruders away. Still, there’s something god-like in a common catbird’s defense of its nest and determination to frighten off or redirect the attention of possible intruders.

My real-life intruders are often discouragement, fear or loneliness. Sometimes God descends to my aid when I listen to music I love and let it fill the airwaves, spilling into my heart and tense body. A sign that majesty and power are present in ways I don’t understand.

This doesn’t solve my problems. It simply makes things bearable, and invites me to relax, knowing I’m never out of the range of God’s care. I think another way of naming it is Sabbath rest.