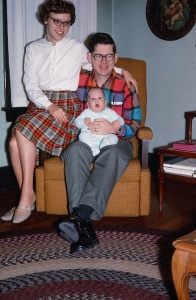 Time for another show and tell! I’ve gone through hundreds of old photos lately, and have a few choice shots to show you. I promise not to do this every time you turn around. I also promise to do it again….

We enjoyed four months living with Son in Mr. Griswold’s house. Every day, D gives Son a bottle. Usually in the afternoon when I’m dragging a bit, before supper. I love the grin on D’s face, and the fact that changing Son’s diaper was part of the deal! This is in Mr. Griswold’s back yard.

This idea came from one of my hospital nurses. A way of getting D into the picture and making sure Son would accept a bottle as needed. I was relieved to have this little break in the day. And no, he never preferred the bottle to nursing. In fact, we continued this happy practice with our daughter.

In mid-December 1968 we move into our new apartment, the entire first floor of this house. The owner and her daughter live on the second floor. It’s a relief to be in our own place, not responsible for accidents on someone else’s fancy carpet or upholstery.

Here’s a close-up taken several months later, in the small garden beside the house. Son’s personality shows all over his face and in his body language. Outgoing, gregarious, inquisitive, constantly in motion.

Peek-a-boo! (Cheery curtains made by me) 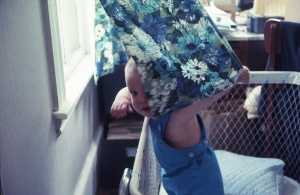 You may find the next few photos disturbing. Don’t forget this was 1968, not 2015! There were no laws about how to travel in cars with children, and no laws about cribs. Here’s the first photo: 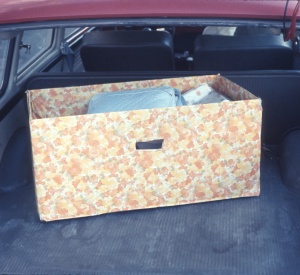 We inherited this baby box from friends who lived in this apartment before we did. They created it, and used it to transport their little girl when she was a baby.

It has a baby-carriage mattress in the bottom, and is covered with water-proof, easy to wipe clean Contact tape. The cut-out holes at either end and on each side make it super-easy to lift, carry, slide in the back of our VW squareback, and hit the road! Our constant companion. We drove all over the Boston area and down to Savannah and back using this wonderful invention.

Now for the crib…. 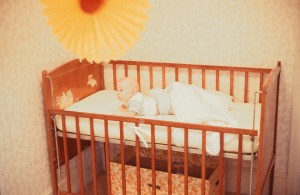 OK. This one makes me a bit queasy, too. There are no locks on the sides of the crib, just latches that are easily manipulated (loose), and subject to failure. Also notice the band around Son’s middle and the ties on either side. That’s to make sure he doesn’t try to climb out of the bed, and that he remains on his stomach while sleeping.

Did he fight it? Never. In fact, he became accustomed to having it put on as part of his bedtime ritual. It also helped  his blankets stayed in place, which gave me peace of mind. Until the day he discovered how to untie the tapes and we had to ratchet up our knot-tying skills.

The hat below (and above) is probably a recycled plastic food container. A friend kindly offered the piano for next to nothing. It was worth next to nothing–except that it looked good and was better than nothing! I loved playing it, though it looked better than it sounded.

Finally, Son with D, an early introduction to how to read a book. 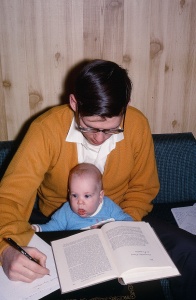 Thanks for reading and looking! I hope you’re having a great weekend with friends and family.