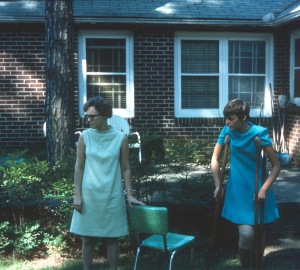 Fall 1969-spring 1970. I loved having Diane around during my first year as a Faculty Wife. She was a senior at the Bible College. Diane quickly became part of our social life, along with some of her zany, like-minded friends. D took this photo at the rental house just after we arrived in fall 1969.

Diane had been in Japan during the summer with a team of students doing short-term missionary service. Her bum knee (injured months earlier while playing basketball with one arm) flared up, and she returned on crutches. Now we’re trying to find a spot on the ground that’s flat enough to keep her steady while we eat lunch outdoors.

Perhaps you noticed how much things have changed at the Bible College. Both of us have real knees that actually show. No more covered knobby knees! Or skirts below the knees.

Over the Christmas break in 1969, we moved into our new house and enjoyed a rare snowstorm! See below. That’s our son in his winter gear, intended for Boston winters. Which, of course, this is not. The snow was probably gone within a few days. 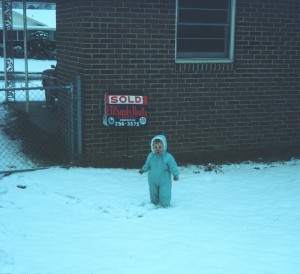 Early in spring 1970, Diane asked if we would host her 21st birthday party in mid-April. Of course we would! Given her creative streak, she wanted something memorable. No silly games. Just challenging and fun activities. Most of these women had either participated with Diane in one of her crazy dormitory practical jokes, or had been a target. They didn’t like dull.

So for the main activity we came up with a giant finger-painting session. It would have to be on the floor. On butcher paper that D and I taped together and cut into a large circle. Something to treasure forever! We mixed up ample fingerpaints, and I baked goodies galore plus a birthday cake (no pictures, sadly).

Here are two photos of the main art event. 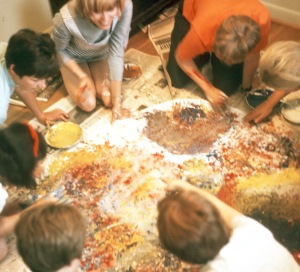 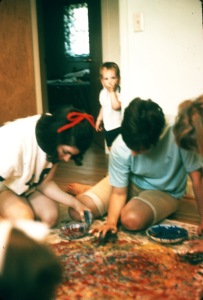 I think Diane is in the lower right-hand corner of the first photo. About 12 women came.

In the background of the second photo you’ll see our son, now about 1 ½ years old, looking on with longing and apprehension. Yes, he’s been told this is for the women, not for him! How cruel can it get? See his thumb in his mouth? He’s definitely fighting the urge to jump in.

I can’t remember how it happened. One minute he was holding back. Then the women took pity on him. Someone took his shirt off, and the next minute he was all over that work of art and the women were just loving it! As was he.

So was I, and then I wasn’t. It was fine as long as he stayed on the edge and dabbled. But crawling onto the great work of art was the last straw! D saved the day. He grabbed Son  before he got to the middle, and took him straight to the bathtub. I grabbed the camera and followed. Don’t ask me how it got on his back. I don’t want to remember. 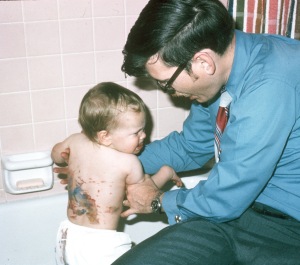 Then there were super happy visits to Diane’s dorm room. Diane took this photo during one of his babysitting visits to her dorm room. He’s sitting at the foot of her bed. 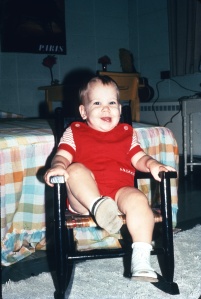 Our son doesn’t really get it that there’s an intruder coming soon. But first I need to backtrack a tiny bit.