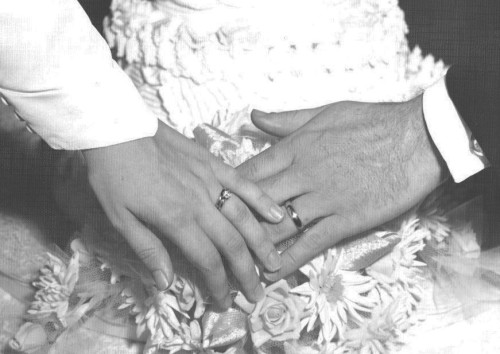 When I married D I believed I’d found the answer to all my problems. I was ecstatic. Finally I had a life of my own, and a man who would love me and not try to fix me. It might not happen overnight, but eventually I would be my own woman, doing my own thing. And D would love me no matter what.

Two weeks before we married, in 1965, I told D I was afraid he would leave me behind. Here we were, getting ready to marry and move to Boston where he would pursue a graduate degree. But what would I pursue? No, I didn’t have anything in particular I was dreaming about, though someday I might want further education.

In 1973, we ended up in California with two young children, and both of us enrolled in seminary. I was ecstatic. Maybe I would find myself at seminary.

Yet my sense of being on the sidelines of life grew. Especially as D received work-related assignments to travel, while I stayed home caring for our young children and pursuing my seminary studies.

I went through periods of exhaustion, depression, bouts of anger, resentment and resignation. I felt trapped, misunderstood and lonely. Any kind word or smile that came my way, especially from men, was more than welcome, though I felt uneasy about this. Wasn’t I supposed to love D and no one else? And wasn’t his love for me more than enough?

Seamlessly and unknowingly I enacted the script of my mother’s unlived life. Not just a script about still needing love and affection, but a larger script about not having or following my dreams, not believing in or taking care of myself. I was too busy taking care of others.

I didn’t know or believe in myself, or my ability to go after large targets and impossible dreams. When opportunity knocked, my habitual responses were self-defeating.

I was in trance mode—caught in a waiting-game that feels like being on a train that moves yet never arrives because it has no known station.

I watched and cheered as other women and men pursued their dreams. I wrote hundreds if not thousands of reference letters on behalf of others. Yet never once did I write a letter in support of my dreams. I was living my mother’s unlived life. Doing what I could to support others, and choosing not to pursue anything strictly for myself.

So how does my history with men fit into all this? More to come.

8 Comments to “Haunted by unlived history, #2”