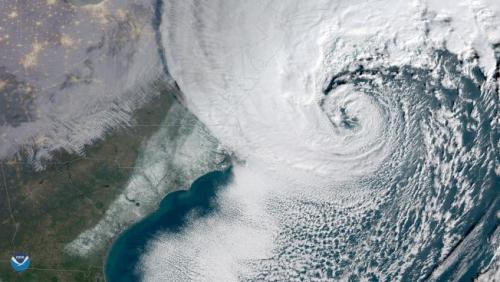 wild nor’easter
whiplashes its way
through the night

And we aren’t even at the center of the storm. Fury comes to mind. Along with chaos, heavy wet snow, traffic at a near standstill, unpredictable wind gusts and icy cold. Our  generator has run since about 6pm last night. The sun is out and the damage is visible. Not much in our yard, but a mid-size tree fell during the night, roots and all, across our neighbor’s driveway. It was chaotic.

I can’t help thinking about our President and the current state of our disunion. Chaotic. I know…some think chaos is inevitably linked to creativity. Perhaps it is.

I think of it as a sign of breakdown that may or may not end well. Especially when chaos comes to dominate the multiple pronouncements, tweets, behaviors, faces and voices of POTUS. It’s so all-encompassing that I’m tempted to expect and demand nothing better. Or adjust to it as the new normal.

Many years ago, for three seemingly endless years, I had a Dean who thrived on chaos. The kind he created around himself and across the seminary daily. I remember vividly the day I figured out how to comport myself in his presence.

That day I knew exactly who was in his office before I went in for my appointment. It was someone I worked with often, and depended upon as a faculty colleague. Almost as soon as I sat down across from the Dean’s desk, he began asking questions about the colleague who had just left the room. I refused to answer, and got my agenda on the table.

I also knew that the moment the next person walked through the door, the questions would be about me. Indeed, he found ways of gathering bits of information and turning them to his own benefit. I knew I was on his hit list, as were several other colleagues.

There had been a warning sign I missed the very first day I met him. I was on the search committee tasked with finding candidates to be our next dean. He was one of several we interviewed in person.

He didn’t know me prior to that day. Yet the moment he walked into the committee room he broke out into a great big smile, came straight over to shake my hand and tell me how much he had heard about me and how much he was looking forward to meeting me. Indeed. Had I only realized….I’d just met another version of divide and conquer.

Through a series of unexpected events, he became our Dean and left us broken and divided as a faculty, not sure what had just hit us. We were reluctant to talk with each other about it until he was gone and we knew we were in safe space away from the seminary.

I credit our interim Dean for calling us together in a hospitable setting. Many, including me, carried unexpressed shame, anger and tears that broke out when we met to process what had happened.

Never again. Chaos as a management technique was like living hell. I’d rather endure a fierce Nor’easter any day or night.