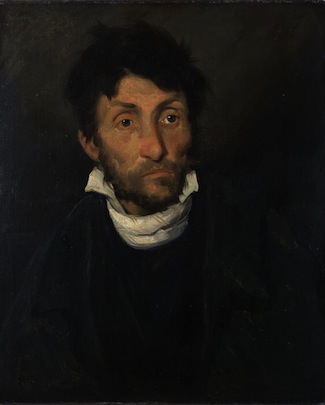 Sleepless unblinking eyes
scan the horizon night and day,
on the alert
for what will never
assuage his aching hunger
to be accepted or loved
just as he is minus
his flashy collar and
the darkness into which
he falls by day and by night,
misappropriating fashionable
pieces of what he will never find–
Something or someone
to soothe his aching lust
for what does not now and will never
belong to him

I wrote the poem above while examining the photo at the top. If you’d like to know more about this remarkable series of paintings, check out this article. It includes the five surviving portraits, including brief commentary about each remaining portrait. Residents in asylums sat for each painting.

Kleptomania, as defined by the Oxford Dictionary, is “an irresistible tendency to theft.” It doesn’t matter whether one is wealthy or destitute. Though these thefts may add up to a large collection, they aren’t necessarily about money or survival. It seems safe to say the person so afflicted may have, at the least, a large hole in his or her heart. Some ache that wants to be soothed, if not filled.

So what do we do with this poem? I’m not an expert in reading people. So I won’t assign a particular person to this poem, though I’m at least a bit tempted. Nonetheless, speaking as a citizen, and given the current and historical state of disunion in our country, it’s fair to say this:

Signals from the top
empower cohorts of others
intent on stealing from others
large and small opportunities to have
a fair chance in life.

Also known as misappropriations,
they are often virtually invisible
until called out occasionally
to soothe the masses.

We’re living our own USA version of a country driven by kleptomaniac-like behavior. That means we too can be lulled into small yet powerful acts of theft from others. These actions could be as ‘innocent’ as turning a blind eye when we see something taken from a neighbor or stranger. Especially things to which we’re all entitled, whether purchased with money or not.

I don’t have easy answers. Our leaders, beginning with POTUS, set the tone or they look the other way. This doesn’t mean the rest of us are off the hook. It means we’re now on the front lines. What can I return to my neighbor, or that stranger? Trickle down is not an option.