Appalled
My eyes retrace the
Tortuous path from
There to here

During the last several days I reviewed my 1993 planning file for a  once in a lifetime meeting with my parents. I chose the eve of my 50th birthday. At the time, I was a professor at the seminary, depressed, and unable to relate as an adult to my parents. My father was a pastor, my mother was a church musician, and we four daughters were the preachers’ kids. A high stakes family.

My depression had become unmanageable. I needed professional help. One of my pastors, a woman, recommended several psychotherapists. I was terrified when I made my first enquiry. In my family, we never sought out “worldly” help for anything that smelled like psychology. Church and the Bible were all we needed.

Still, I took deep breaths, made my first phone call, and began seeing a psychotherapist twice a week. At my intake interview I never mentioned my difficult relationship with my father. Nonetheless, the woman interviewing me suggested I consider a meeting with my father. I was horrified.

Working with my therapist, I began from scratch. Not immediately, but after my first few years of therapy. This would be my meeting, structured and led by me. It wasn’t about ensuring a successful end or pleasing my parents. I lived in Pennsylvania; my parents lived in Georgia. My job was to initiate, plan, and produce an agenda for a meeting in Georgia. No dress rehearsal or second chance.

But first I had to clarify my boundaries. This changed everything, even before I began working on a meeting in Georgia. More about boundaries in a later post.

Thanks for stopping by. Praying for clarity, wisdom and courage in these troubled days.
Elouise♥

In recognition of our most recent national upsurge in suicides attempted and/or completed, and in honor of family members and friends who ended their lives on this earth, or made the attempt and failed.

Always a thousand unanswered questions. Always a sense of ‘what could I or we have done differently?’ Always a desire to go to sleep and hope for something better when I wake up.

My story from the inside out

I grew up in a church that wanted to know exactly when and where you were converted, and from what. The deeper the degradation, the more your story was valued. Unfortunately, I had no dramatic story. Sometimes I wondered whether I was a ‘real’ Christian.

In November 2013 I wrote the following brief piece to read at a church meeting. I read it this morning and teared up. A timely reminder of how God works in my life.

I don’t remember when I received Jesus into my life. I do, however, remember times when I was lost, and God came looking for me. One of these was a huge turning point in my life.

I was in my 40s. Outwardly I seemed to be following Jesus; inside, I was lost.

In my mid-40s, I learned about family matters over which I had no control. Secrets I’d been carrying inside me for years began to eat away at my gut. I fell into deep depression. At home I sat for hours doing nothing but staring out the window, or weeping uncontrollably. At night I frequently asked God to just take me while I was sleeping. I didn’t want to wake up the next morning. I wanted to die.

I had always survived by being a good girl on the outside, and hiding what was on the inside. This took great effort. I had also become addicted to running my own life and thinking I could run everyone else’s too! But it wasn’t working; my body, my emotions and my spirit were in turmoil.

I believe God was trying to get my attention. And there was a price: I would have to come out of hiding and ask for help. I was terrified. What would people think of me? Fortunately, I was also desperate.

So I began attending a 12-step program to deal with some of my family matters. At my first meeting no one frowned, judged me, or expected me to perform. They weren’t shocked when I told them why I was there. They just welcomed me, smiled, listened, encouraged me, and said to keep coming back.

So I did. Slowly, I began to relax, join the rest of the human race, and trust that God was in this process.

Today I’m still a recovering human being and a grateful follower of Jesus Christ. Sometimes I still struggle with shame and anxiety, and try to control my life or change other people. I don’t, however, suffer from deep depression or pray that God will take me while I’m sleeping. I remind myself daily that I am God’s beloved daughter child, and that this is more than enough to bring God delight. When the time comes for my final home-going, my only hope will be to appear before God then as I do now: just as I am without one plea.

If you’re feeling lost or despondent today, God may be trying to get your attention. 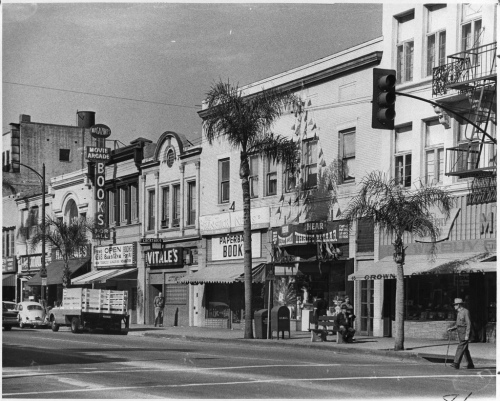 ~~~~~Colorado Boulevard in Pasadena, California in the early 1970s

Fall 1973. Every now and then I become aware of something I’m lugging around, unopened and unexamined. It has something to do with my childhood and teenage years. Something about END_OF_DOCUMENT_TOKEN_TO_BE_REPLACED

This is one of the more bizarre things that has happened to me. Somewhat like My First Boss. I didn’t see it coming and I could scarcely believe it was happening. END_OF_DOCUMENT_TOKEN_TO_BE_REPLACED

…Keeping the home fires burning. That’s my hat, not yours! October 1972

By summer 1972 D knew things might not work out for him at the Bible College. I wasn’t sure they would work for me, either. END_OF_DOCUMENT_TOKEN_TO_BE_REPLACED 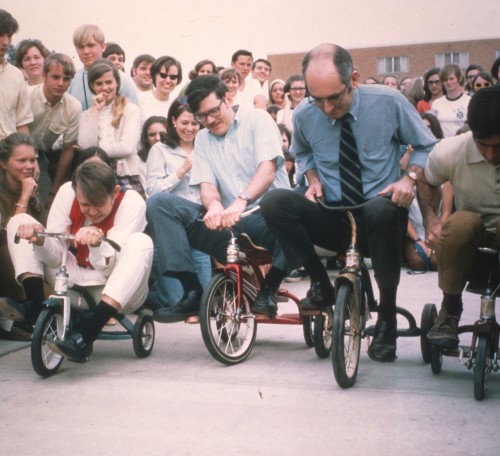 Race of the Year! D on red tricycle with other contestants, Bible College 1972

By spring 1972, the stress of being a mother and the reality of being back at the Bible College had worn me down. My depression returned.

D was struggling with the cultural climate of the Bible College, especially its assumptions about the place and role of students. The president talked about making changes, yet it seemed not much had changed since our days at the Bible College. The culture was still authoritarian and hierarchical (male priority; female submission).

No one wore a uniform. Yet there seemed to be an attitudinal uniform with key components that signaled whether you were ‘submissive’ or ‘rebellious.’ Sometimes it was as simple as how much makeup a woman chose to use. Other times it was about hair.

For example, the length of men’s hair. That included how much hair he had on his face—beard, sideburns, mustache, plus ponytail or anything over his collar or down his back. Clean-shaven was the goal. And neat. Nothing that would call attention to oneself. D pushed the boundaries a bit with his hair, though that was the least of his worries. You already know about the tie.

Then one day Jesus people started applying to come to the Bible College. Hair and all. Instead of welcoming them as they were, the men were told to cut their hair; men and women were told to ditch their street clothes for proper attire. D and others took up their cause; eventually they were allowed to enroll.

Then there was the student newspaper incident. The Bible College wasn’t in the habit of requesting student feedback or opinions about much of anything. So a group of students, male and female, decided to publish their own campus newspaper. They called it “Little People Think.” They asked D for his counsel, and later for his help.

As a female graduate of the Bible College, I could only agree with them. I also agreed to write an article for the first edition. Was I nervous? A bit. It seems this was my first official article telling the truth publicly.

I wrote about assumptions and expectations professors and others seemed to have about women. Though I didn’t call myself a feminist back then, I was fed up with the second-class status status required of women students. My article was included in the first edition of the newspaper.

The students wanted to distribute this via student mailboxes, just like the official student newspaper. Their solution? They asked D if he would put them in the boxes. He had a key to the mailroom and was a faculty member. No one would suspect him unless they saw him in the area at 4 am or so!

The alternative paper was furtively distributed to all campus mailboxes. No one knew where it came from or how it got there.

The administration wasn’t happy, but they didn’t demand a recall. Strangely, no one ever said a word to me about my article, which included my name. They did, however, make sure copies of the next edition never made it into student mailboxes or were distributed on campus.

Then there was the 1972  presidential election. D and I put a bumper sticker in the back window of our car. We were for McGovern/Shriver, who ran against Nixon/Agnew. It remained there for less than half a day!

Within hours of arriving on campus for his morning classes, D was told to remove the bumper sticker  immediately. The president didn’t want members of the board to arrive on campus and find a Democratic bumper sticker on a faculty member’s car. It seems freedom of speech didn’t exist in the same way for everyone at the Bible College.

In the midst of this I began thinking about ways to get help for my exhausted body, emotions and spirit. I felt trapped.

I’m sitting here looking at the title I gave this series: Faculty Wife. Was I a Faculty Wife during the four short years we were back at the Bible College? If not, END_OF_DOCUMENT_TOKEN_TO_BE_REPLACED

Last December I published a longer version of this post. The portion below covers the period of time I’m writing about, our first year of marriage. Directly across the street from our apartment was an auto body shop open 24 hours a day. That’s because wrecks happen 24/7. END_OF_DOCUMENT_TOKEN_TO_BE_REPLACED

Even though I’m a recovering care-taker, I still get urges to DO something about situations I don’t like. Most often it’s about things that are none of my business.