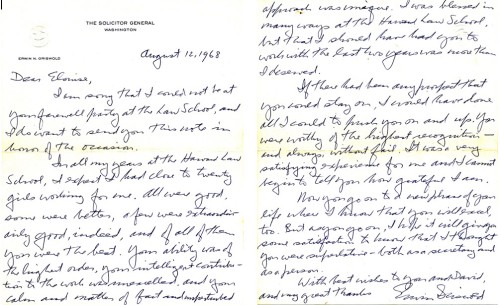 Do words in old letters ever die? Here’s Mr. Griswold’s thank-you letter about my work in the dean’s office at Harvard Law School. Click on the letter to enlarge it.

When it arrived in 1967, I showed it to David and put it away. Our first baby was almost ready to be delivered. Besides, I didn’t know how to understand it or how to receive it.

Early 1990s – nearly 25 years later
I don’t remember reading the letter again until I was in my late 40s. By now we have two children. I’m a professor at a seminary and am seeing a therapist for PTSD.

I’m also writing a book about myself as a theologian. As part of my research I’m going through my journals and personal papers. I find Mr. Griswold’s letter in a small manila envelope, with other treasures.

In my memory, the letter was a lovely thank-you letter from my Best Boss Ever. This is true. Yet it’s more than that.

I read it again and burst into tears. This is the most unexpected, soul-nourishing letter I ever received from anyone. I show it to D again. I’m not sure why it moves me so much.

I take it to my next therapy session and read it out loud. I burst into tears again. We talk about it. I desperately need to hear and believe Mr. Griswold’s words. I put the letter back in the envelope.

Sunday, 12 April 2015
Last Sunday I pulled the letter out yet again, knowing I’d be writing about Mr. Griswold’s retirement and the end of my work in the dean’s office.

This time the flood of tears was more like wailing than weeping. What’s this about? Why is this letter still bringing up this level of emotion in me?

I don’t know, though I have a beginning thought. My father wrote me several letters when I was an adult. Most are short; a few are family newsletters. Some are the keeping in touch kind. How are you doing? Here’s what’s going on right now with us. We love and miss you. Dad.

I also have several written in the later years of his life. Lengthy, typed, colored by his pained anger about the personal work I’m doing, and about the way my (adult) behavior toward him has changed.

So here’s a letter from Mr. Griswold. He isn’t my father or my First (and Worst) Boss. Mr. Griswold doesn’t try to change me into someone I am not. He doesn’t criticize or talk about people behind their backs. He doesn’t treat me or any of my co-workers with disrespect.

There’s no reason for me not to believe this letter. Yet part of me doesn’t believe. The other part weeps.

I weep because I never had a letter like this from my father.

I wonder whether Dad ever saw me as I am. Mr. Griswold sees me. He recognizes not just my secretarial skill, but my personal qualities and my potential to excel. He also knows I’m human like everybody else.

Whether I recognize myself in it or not, this letter made a difference in my life. So did working with Mr. Griswold. But that’s for a later post. Right now I want you to see the letter and to hear how difficult it was, and sometimes still is, to receive it with my heart.

Filed Under: Family, Marriage, Writing
Tags: Embarrassment and shame : Fathers and Daughters : Mr. Griswold's letter : Personal Writing : Psychotherapy : Relationships : Tears of grief and sadness : Thank you Letters : The Dean and I : the power of words : Trauma and PTDS