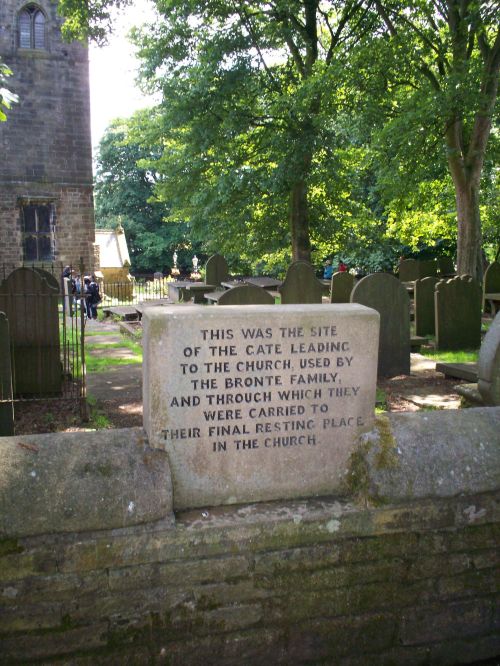 For weeks, this short poem by Emily Brontë has haunted me. With a small handful of simple words Emily evokes feelings of grief and shock that come from unexpected death. My comments follow.

How loud the storm sounds round the Hall!
From arch to arch from door to door
Pillar and roof and granite wall
Rock like a cradle in its roar

From selected poems of Emily Brontë
Published in Everyman’s Library by Alfred A. Knopf, 1996

Perhaps it seems strange to talk about unexpected death, especially during a powerful storm that shakes foundations and roars as it gathers speed.

Yet of all the things that might have fallen, it was “That Elm tree by the haunted well.” A giant. A fixture in the landscape.

In addition, it fell across not just any path, but the path between house and Hall. That would be the Brontë house (church parsonage), and the church Hall where father Brontë served as a parson.

The house stands at the opposite end of a path leading to the church Hall. Besides getting to the church for services, it was also the pathway down which deceased members of the Brontë family were carried to be laid to rest in the family vault.

Suddenly a furious storm erupts, and “That Elm tree by the haunted well” comes crashing down across the path. It seems the only solution is to stay in the church Hall until tomorrow. Perhaps by then we’ll be able to find a way back to the house.

So what does this poem suggest? Perhaps the giant Elm’s sudden death refers to a person whose life touches everyone. This could be a family member, such as Emily’s mother, or one of Emily’s siblings. We might also ask whether it’s possible to return the house as it was.

The poem describes the way we often experience death. It leaves us feeling lost and uncertain. Without a compass, or a clear map for how we’ll proceed from here.

The poem also invites us to consider each day precious. The end often comes without warning. Especially to those we most love and depend upon. Or to ourselves.

Filed Under: Death and Dying, Spiritual Formation
Tags: Emily Brontë : How loud the storm sounds round the Hall! : Interpretation of Poetry : Life and Death : Loss of Friends and Family Members : Relationships : the human condition : Vulnerability