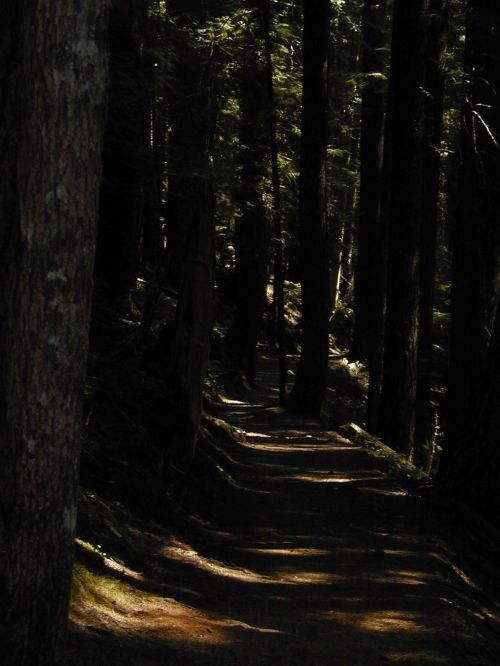 The last several months felt like a never-ending hike in the dark. Not knowing. Waiting. Getting bits and pieces of information, but not the whole pie. Which would likely be liver and okra pie—my worst nightmare foods when I was a child!

Next week I’ll see my hematologist. Based on the outcome of bloodwork he ordered a month ago, he will tell me whether I’m a candidate for a health issue at least as difficult as peripheral neuropathy. D will be with me so that we hear this news together.

That’s my report for now. I’m taking this one day at a time: laughing or crying when I feel like it, lying down for short naps as needed, playing the piano, listening to music, watching the birds, and sticking to my super-healthy diet.

Praying this finds each of you in reasonably good health.
Elouise♥

I don’t think I’m hitting rock bottom. I am, however, weary in body and spirit. Sometimes I’m standing still. Going nowhere. Other times I’m on a roller coaster swinging wildly between slow, difficult climbs uphill, and furious descents to whatever awaits me.

My mind tries naming things I’ve accomplished this day, this week, this month, this year. Yet the litany of things done doesn’t relieve the anguish of this heavy, relentless tug at my body and spirit.

We here in the USA are in a mess. We don’t know how to get out of it. Whether we like it or not, it colors every day of our lives.

Nonetheless, I believe our Creator and Redeemer understands the big picture, and invites me to trust that all will be well. One day, one breath, one weariness and one joy at a time.

I must admit to a case of weariness. Physical, mental, emotional weariness.

I don’t mind messes. In fact, I’m challenged by them. I used to enjoy sorting things out into neat piles. Not for my own pleasure, but because things go better when they’re arranged in a sensible way. So we know who’s who and where things are and how to access truth.

We seem to have less sense than usual about us these days. Not as individuals, but as citizens of these weary, mostly disunited states. It isn’t too much to say we’re in a hunkered down war-like posture. We’ve been there for decades, growing wearier by the day.

No one has declared open warfare, though we’ve come close. On a regular day, those who feel the heat most often are our best barometers. Women, children, the unemployed, prisoners, immigrants, and sometimes anyone who lingers too long to watch the sunset.

It feels as though our government has become the new war zone that guarantees we’ll not cross over to the ‘enemy.’

And yet, for this and much more, Jesus of Nazareth turned his face toward his enemies and toward death. One wearying day after another.

I pray we’ll find reason to hope not in ourselves, but in a power greater than we are. Even though it means learning to die.

What will this auspicious day tell us
about ourselves
or will it all be about Mr. Trump
whose dis-fortune has waxed eloquent
in decades and years past

The saddest part is that no matter who wins this election, Mr. Trump still has over two months in office.

Thank you for your visits during this year of Covid-19 and Black Lives Matter. I can’t tell you how life-giving it has been to write and post my thoughts. Today I’m feeling worn out. Not yet ready for whatever comes next.

For now, I’m going to cook, walk, enjoy the sunshine, listen to music, play with Smudge, and maybe even play the piano.
Elouise♥

Do hearts breathe? Mine does. In and out, day and night. Life-giving blood flows constantly, silently moving through my body to cleanse and renew.

There’s nothing like evening silence. It’s almost palpable. I feel it reaching out to me, willing me to relax. Putting the day’s activity, noise or even silence into perspective. Calming my heart’s breath.

Advent also reaches out. Inviting me to be conscious of, but not stuck in the bleak winter in which we live. Sometimes up, sometimes down. Sometimes almost to the ground. Flat on our faces with despair or heartache.

Into bleak winter I look for Light and Hope to arrive in surprisingly ordinary ways. Secretly and silently. Can you see it flickering? Sometimes I can, especially when I invite evening silence into my ordinary life.

This morning I’m a bit slow, still trying to shake off weariness and a feeling of heaviness. No obvious cause or solution. Except to do what I can to keep moving today. One foot in front of the other. Or not.

Twilight can be a magical time of day—as it was yesterday evening when we were out for a late afternoon walk.

Then there was this morning’s twilight. I felt rudely awakened by light leaking through the window blinds. I wanted to pull the covers up over my head and go back to sleep. Which I did for a bit.

I’ve stopped trying to diagnose my body’s reasons. Instead, I’m going with the flow of today—slowly, without high expectations. Enjoying what I can, reading as I’m able, listening to music I love and believing today is important. Not simply for me but for you and for our Creator who loves this tired old world from the inside out.

I’m weary this evening, Lord —
All I want is Your smile.

Daylight faded hours ago —
The choir sings to a congregation of one.

I jotted down these words last night while listening to an old hymn, “Abide with me; fast falls the eventide.” The end of a slow day, quiet and unimpressive with the exception of two encounters.

One was with a neighbor when I was out walking. She was standing on her front porch, waiting for a taxi. We talked about her recent illness, her cat, and the woman who died across the street and down the lane just last week.

Later during my walk I saw a couple I’ve known for years. They were out walking, too. About my age, both retired and in good shape with the exception of her fractured ankle and torn ligaments still on the mend months later.

I’ve been focused on prayer lately. Especially since my friend Margie died and left a huge void when it comes to prayer for others. My list grows daily. Not in leaps and bounds, but in small increments. Everyday people with difficult challenges and heartaches.

I haven’t figured out how to pray in a pointed way for the big stuff that hits the news every day. Not that I don’t know what to say. It’s more about not having a personal connection, or being so incensed that I don’t want to pray ‘for’ this or that. I just want to rage against it.

Perhaps things aren’t really worse than they used to be. In some ways, I’ve seen this country in worse shape than we’re in now. Yet in other ways we’re simply reverting to what I’d hoped we left behind. This, too, is a great weariness.

Maybe that’s where I need to begin. With things like the opioid crisis, the result of fraud on multiple levels over many years–perpetrated on people in chronic pain. People just like you and just like me. I wonder where in my neighborhood it’s making its mark today?

Leave your shoes at the door 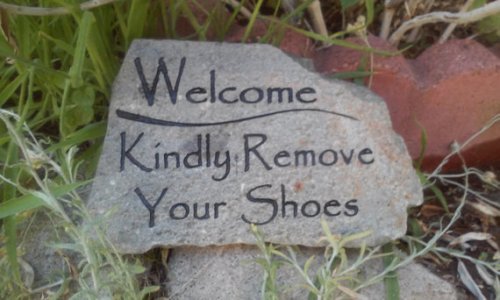 Please, leave your shoes right here at the door—

Leave them all at the door just for today
and come, rest your aching and world-weary feet
on this dusty shared ground we call Mother Earth

Molasses
oozes
through
my veins

Sluggishness
creeps
from head
to toe
smothering
every desire
to move

Doesn’t everyone
have a down day
now and again?

I’ve had stretch of good days. Very good days, in fact. The Meddler isn’t happy about this. She doesn’t like being ignored.

Well, it isn’t going to happen. Today I’m weary from the daily grind of creating health-inducing smoothies, making sure I have the right vegetables and fruit for smoothies, chopping them up for smoothies, and cleaning up my smoothie blender so it’s ready for the next round.

The Meddler keeps trying to remind me of cat-fur bunnies multiplying by the hour, decisions waiting to be made, and closets screaming to be changed out for hot weather.

I’ve decided to chill out for the rest of this day.

My soul-mind-body health barometer is a nasty piece of business. Totally independent of my plans and wishes, it does its duty whether I like it or not. It won’t be bribed or bought off with promises to do better tomorrow.

And then there are those pesky paydays. Days when what I wish were true about me has to face harsh reality. Inconvenient reminders of how I’m progressing in soul, mind and body. Or not.

I seem to have arrived on this earth with a predisposition to try harder, more often, more consistently, in better form, with a better attitude. Never give up. Just keep practicing. Little by little today; giant leaps tomorrow. Yes, you can reach the sky. Just pick yourself up and try again!

This morning, however, my soul-mind-body wants something different. The kind of difference Simone Weil writes about in Waiting for God.

There are those people who try to elevate their souls
like someone who continually jumps from a standing position
in the hope that forcing oneself to jump all day—and higher every day—
they would no longer fall back down,
but rise to heaven.
Thus occupied, they no longer look to heaven.

We cannot even take one step toward heaven.
The vertical direction is forbidden to us.
But if we look to heaven long-term, God descends and lifts us up.

God lifts us up easily.
As Aeschylus says, ‘That which is divine is without effort.’
There is an ease in salvation more difficult for us than all efforts.

And so I’m challenged today to wait for God. To give up jumping through hoops and trying harder, hoping for something better. I anticipate God’s descent to lift me up, and kindle quiet thanksgiving in my heart.

We cannot take a step toward the heavens. God crosses the universe and comes to us.
― Simone Weil, Waiting for God